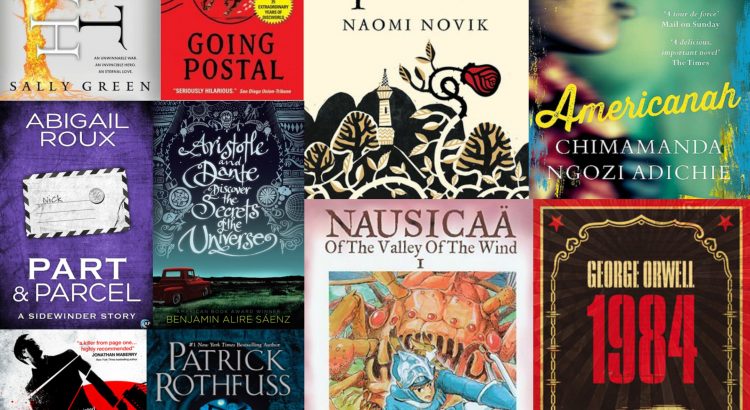 This has been a great year for my reading as I read 86 books (yes, many of them manga, thank you very much).  It’s the second year that I actually keep track of the books that I read through Goodreads and I’m fascinated by the opportunity to go back and, well, remember:P

So, I’m writing this very original blog post, mainly because I want to torture myself as I’m coming up with two-lined reviews for each of the books that I liked.

*In no particular order.

Ha! Was I late to read this one. It’s scary in itself, but scarier nowadays considering what’s happening around the world with the rise of the neo-nazis.

A wonderful fairytale based on Polish folklore with gripping writing that pulls you into the story until the very last page and characters that you want to slap, root for and look up to.

A queer book with beautiful and poetic writing, genuine family relationships, and the summer scent that sticks on your skin until the end.

This book reads like an epilogue to the team of characters introduced since the first book in the Cut & Run series. It focuses on my favorite couple in the series and has some emotional scenes that had me tearing up.

Well, I’m still crying over this book so don’t touch me.

The first book I’ve read from this author, after hearing her TEDxEuston talk “We should all be feminists”, and I loved it. Her voice is as unique as it is real. Her commentary on racism from the place of a WOC outside the US was insightful and enlightening.

I never quite understood Pratchett’s humour, both the whole two times I tried to read one of his books. Then Going Postal happened to me and I finally understood his genius.

A fast read about super powers going awry with a dark, comic-like premise and the eternal question of what, really, makes us monsters.

THIS WAS THE BOOK I WANTED FOR AURI.

This was actually a reread but it’s one of my all time favorite stories out there. A fantasy/environmental-punk with amazing worldbuilding, strong and inspirational female characters and deep understanding of the human nature. This story has just too much soul.